Voorlinden and the princess of polka dots

Two weeks ago I received a preview of the new Yayoi Kusama exhibition thanks to Voorlinden Museum.
It was such an incredible opportunity and I want to share it with you telling a  little bit about some of the works I was able to see that day.

Using art as a medium to deal with hallucinations

Kusama, 90 years old now, find out the power of polka dots at just 10-years-old when she began to experience vivid hallucinations which she describes as flashes of light or dense fields of dots.

The artist once said: “I was looking at the red pattern of the table cloth and when I glanced up the same red pattern covered the ceiling, the window and the walls, and finally the whole room, my bod, and the universe. I began to disappear and found myself again in the infinity of endless time and the absoluteness of the surface. I reduced myself to an absolute nothing“. 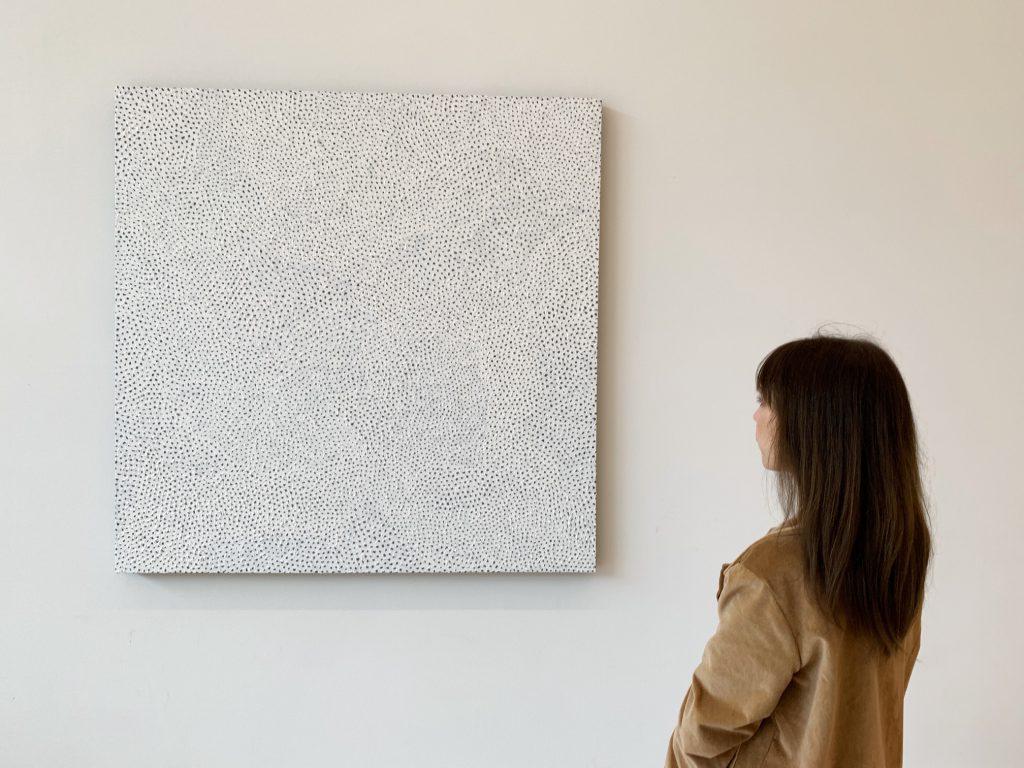 Some manifestations of this neurotic patterning include her Infinity Net paintings. These works are described by her as paintings without beginning, end, or center. The entire canvas is occupied by a monochromatic net.
This diffusion of monochrome paint across the painting is systematically interrupted by small openings in the net, organic variations of circles and ovals.
At the Voorlinden Museum, I had the chance to look at them, and I could vividly feeling a hypnotic sensation caused by that endless repetition of nets.

Other artworks that reveal her enduring struggle to cope with mental vulnerability are objects completely covered with phallic shapes, and the famous yellow pumpkin. 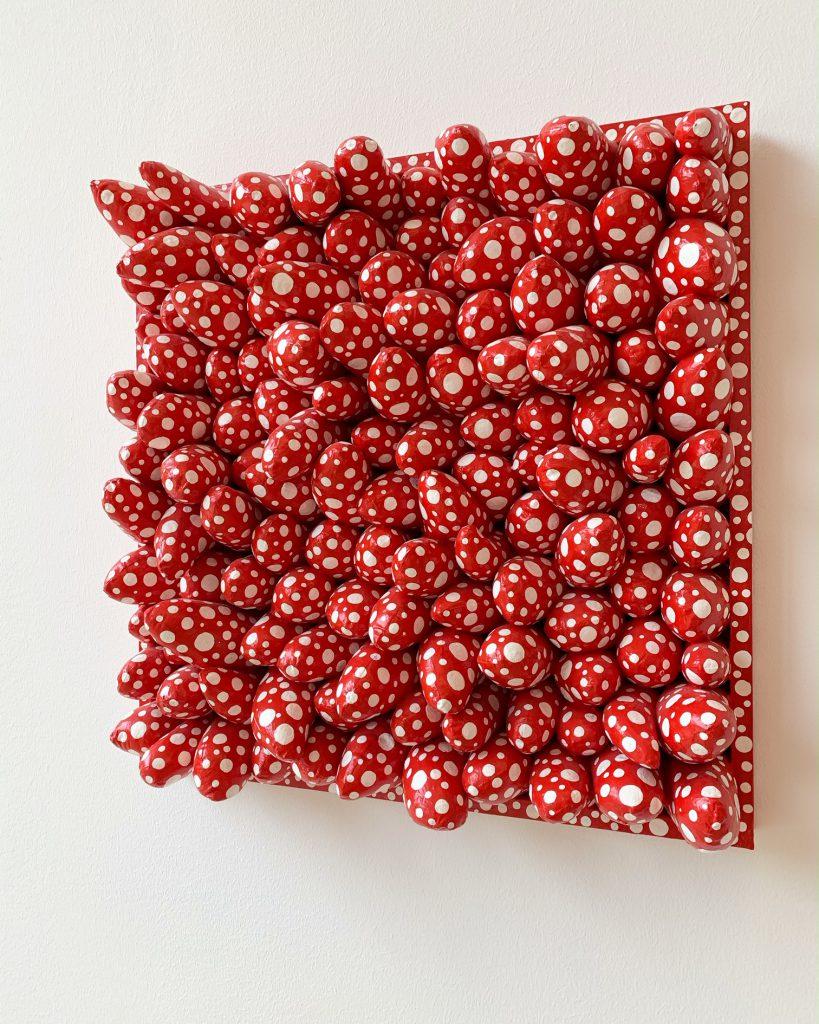 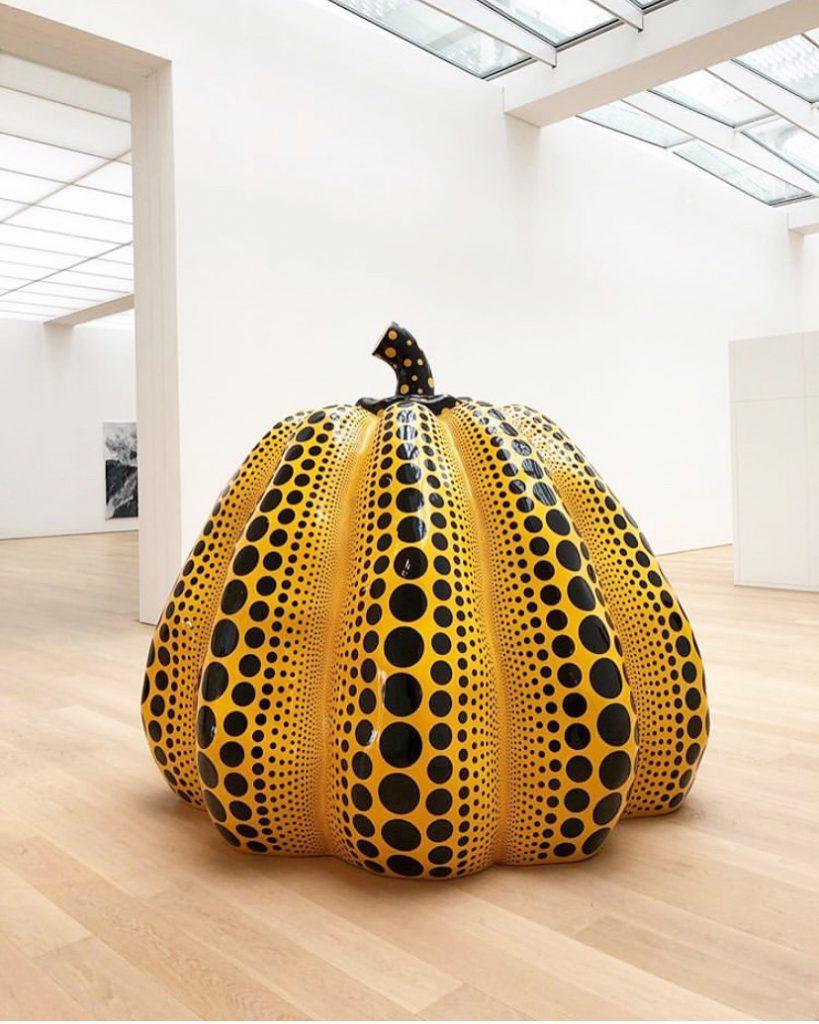 Being part of the work of art

Despite all these incredible artworks, two pieces, in particular, got my full attention. 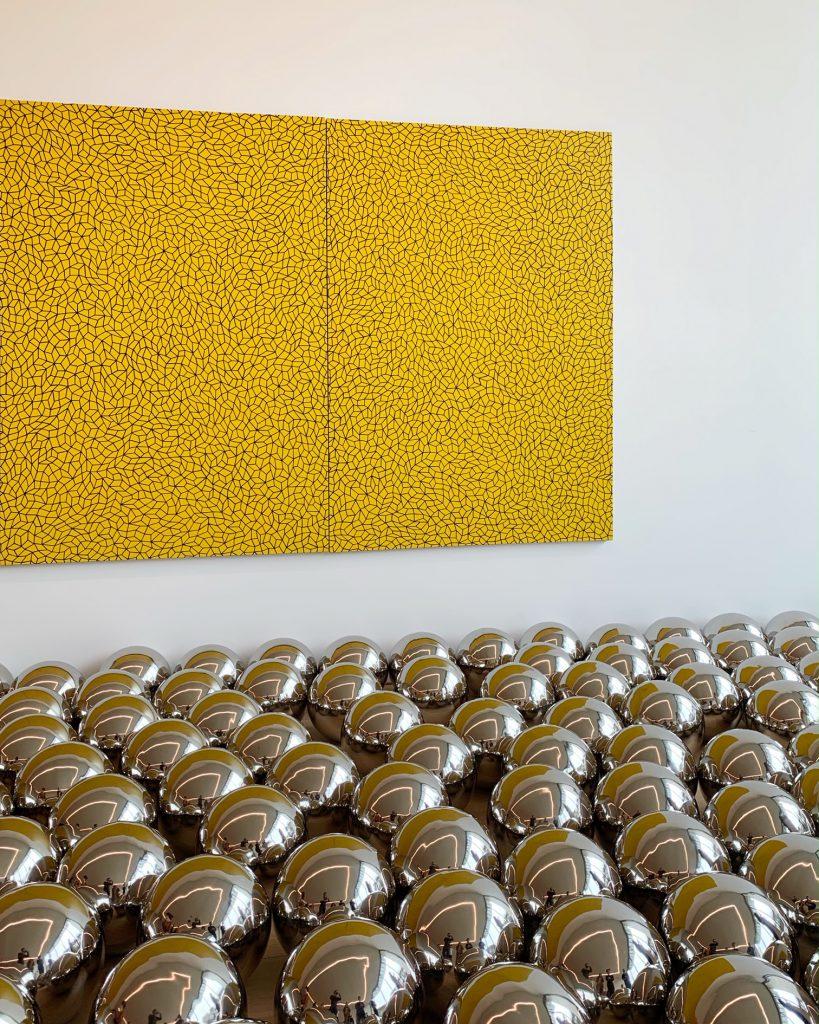 The first one is the Narcissus Garden, made with mirror spheres.
In 1966, Kusama staged 1,500 mass-produced plastic silver globes on the lawn outside the Venice Biennale. The Italian Pavillon didn’t invite her to exhibit her work.
Those balls constructed an infinite reflective field in which the images of the artist, the visitors, the architecture and the landscape were repeated, distorted, and projected by the convex mirror surfaces that produced virtual images appearing closer and smaller than reality.
During the opening week, Kusama placed two signs at the installation: “NARCISSUS GARDEN, KUSAMA” and “YOUR NARCISSISM FOR SALE” on the lawn. Acting like a street peddler, she sold the mirror balls to passers-by for two dollars each. The Biennale officials eventually stepped in and put an end to her behavior, but the installation remained.

This artwork challenges the viewers to see themselves within the spaces they occupy. Encircled by mirror balls, I only saw my own reflection staring back, forcing a confrontation with my own ego. 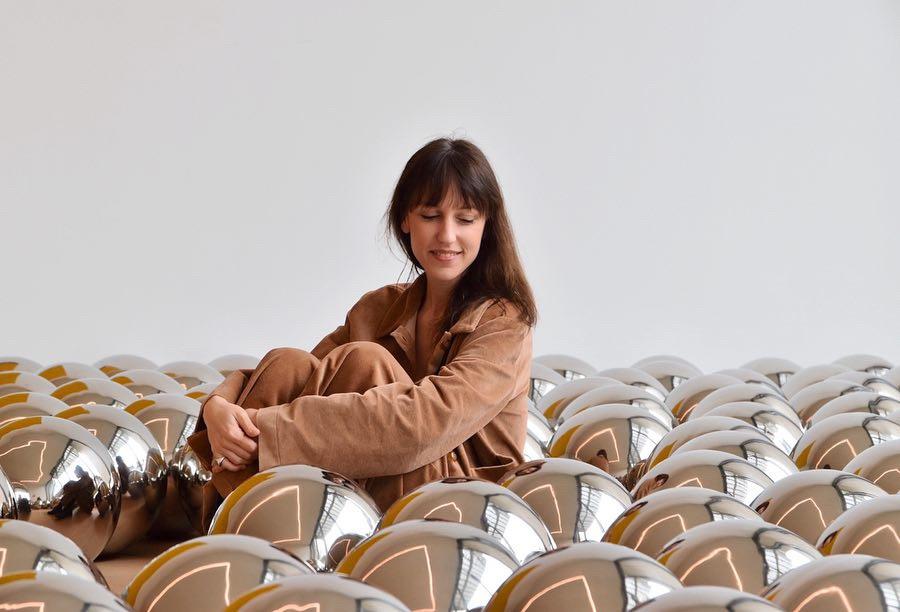 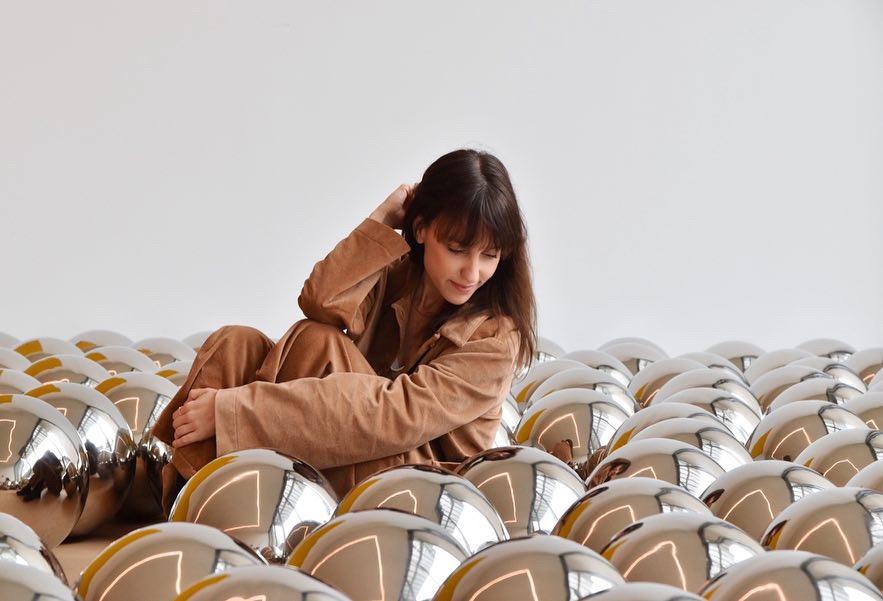 Last but not least, The Infinity Mirror Room.
When you are at the Voorlinden Museum, and it’s finally your turn, through a door you are catapulted in a room in which the walls, the floor, and the ceiling are mirrors.
This seemingly infinite space is populated by hanging, blinking LEDs, which make space seem like a galaxy.
When I was in there I spent very few time on the phone, trying to capture a decent image, and I used those 45 seconds to really immerse myself in her word.
I walked in circles, I admired lights that changed colors and I gazed the multiple reflections of myself on every mirror. 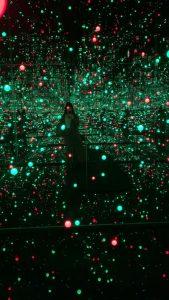 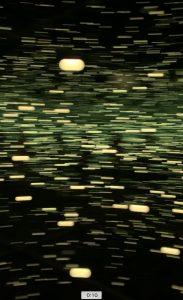 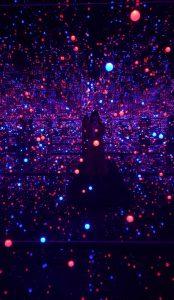 Feed your mind at the Voorlinden Museum

If you want to enjoy a lovely day between artworks and nature (Voorlinden Museum is located on the edge of the Wassenaar dunes) you should spend your time there. It’s worth it!
One piece of advice: to be able to understand better Kusama word watch the documentary about her life, called Infinity.

“I do not consider myself an artist, I am pursuing art in order to correct the disability which began in my childhood. My art originates from hallucinations only I can see. I translate the hallucinations and obsessional images that plague me into sculptures and paintings. All my works in pastel are the products of obsessional neurosis and are therefore inextricably connected to my disease. The only method I have found that relieves my illness is to keep creating art.”

NOTE: These settings will only apply to the browser and device you are currently using.

This tracks your user behaviours. For more informations you can read from the Google Documentation here.